KEMPFER CATTLE COMPANY has roots dating back as early as 1888 when George W. Hopkins moved from Michigan to Florida to harvest timber and take advantage of the vast prairies on the headwaters of the St. John’s River for raising cattle. He purchased his first tract of land in 1888, but the oldest deed in the family’s possession is for a 196,000-acre tract of land, dated 1902. The land sold for just under $1 an acre. George W. Hopkins built a large sawmill, Union Cypress Company, south of Melbourne in the town of Hopkins. In order to move the cypress timber from Deer Park to the mill in Hopkins, he constructed a railroad. Known as The Union Cypress Railroad, the rail stretched east from Hopkins to Deer Park with spurs branching out all over the ranch. Remnants of the old railroad can still be found on the ranch. Hopkins and his wife had four children. Their daughter, Agnus later married William H. Kempfer, who began to oversee the timber operation. In 1915 Kempfer Land and Cattle Company was formed. It’s said that at one time the family ran about 10,000 cows on 104,000 acres.

In 1919, the Union Cypress Sawmill company burned down. In 1925, after the passing of George W. Hopkins, William H. Kempfer received his family’s share of the estate and the ranch became known as KEMPFER’S DEER PARK RANCH. 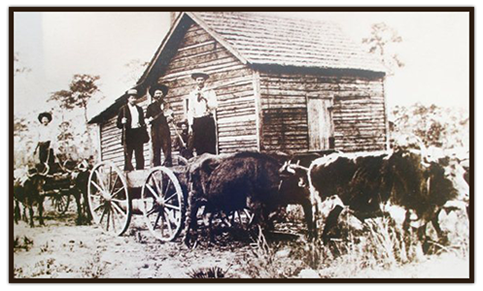 George H. Kempfer, son of William and Agnes, married Carolyn Reed and they raised four children. Together they managed the ranch until George’s early death in 1962. Carolyn continued the management on her own until sons Billy and Reed took over in the late 60’s. In early 1980 George W. Hopkins’s great-grandsons Reed and Billy Kempfer constructed a new Cypress sawmill in Deer Park as Kempfer Sawmill, Inc. In 1983 Deer Park Ranch started doing business as Kempfer Cattle Company.

TODAY, THE RANCH IS OWNED AND OPERATED BY BILLY AND REED KEMPFER AND THEIR FAMILIES, who operate approximately 25,000 acres of the same country their ancestors put together. It has been a longstanding tradition for all of the kids to work cows during their summer vacation. During this time they like to pick out steers to show for the upcoming fair. The kids learn love of the land and commitment to the preservation of this unique way of life by watching their dedicated parents and grandparents working the land day after day. And the family tradition continues.